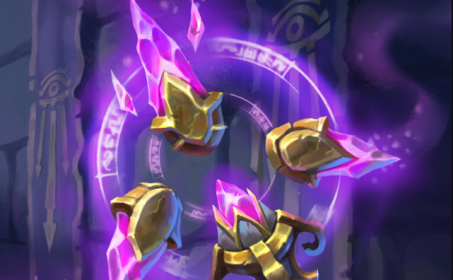 Wild Secret Mage in the Darkmoon Faire – An introductory Guide.

Secret Mage is one of the most strategically complex decks to play against in the Wild Hearthstone meta. With 16 different secrets with vastly different effects, playing around every possible secret is nearly impossible. There are, however, options to improve your chances of guessing the secrets your opponent might play when both players consider what the appropriate steps to play around these are.

When both players start predicting how their opponent may try and use their secrets and what the most efficient way is to punish the other player’s decision, the skill comes in. Today I hope to teach some of you about one of my favorite decks to climb to the Wild ladder when trying to counter specific decks.

What is Secret Mage?

The “Secret Mage” archetype exists for as long as Hearthstone exists. The archetype’s first builds exist because of the card Kirin Tor Mage from the classic card set. Kirin Tor Mage reduces the cost of your next secret to zero. At the time, the secrets available were the simpler ones. Secrets such as Counterspell, Mirror Entity, and Ice Block & Ice Barrier were the most prominent.

The Secret Mage archetype, however, has many clear weaknesses. For example, decks that swarm the board often causes trouble for the deck. The reason for this is the lack of wave clear options for the Secret Mage deck. Its early game tools, such as Medivh’s Valet, are conditional on having a secret active and are generally better used as direct damage tools.

Nowadays, Secret Mage is regaining some popularity since the Madness at the Darkmoon Faire expansion. The new Mage legendary card, Sayge, Seer of Darkmoon, alongside the new Epic Mage Secret, Rigged Faire Game, propelled the deck back into the Wild Hearthstone meta. Since the Scholomance Academy, the deck went through many changes, some I want to discuss today.

Secret Mage decks, which list to play in the Darkmoon Faire?

Currently, two different strategies are surrounding Secret Mage in the Darkmoon Faire expansion. The difference comes in the number of direct damage cards each list plays. The biggest point of contention is the inclusion, or exclusion of Fireballs, in favor of a more tempo oriented card like Occult Conjurer.

What secrets should you play in Secret Mage?

The majority of Secret Mage builds in the Darkmoon Faire include between seven and nine secrets. Try to stick close to this number not to oversaturate your deck while retaining the consistency your Secret synergy cards require. Since the Scholomance Academy, the number of secrets the deck includes increased overall. The reason for the increase is the replacement of Sayge, Seer of Darkmoon, in place of Aluneth to stay more consistent with the tempo gameplan.

Some of the Chinese players went as far as to include two copies of Duplicate in their lists alongside Sayge, Seer of Darkmoon, to further increase the consistency of the deck. However, with the Darkmoon Faire expansion still being quite recent, there isn’t enough information to see if that extreme ends up working out.

Explosive Runes from the Kobolds and Catacombs and Counterspell from the Classic set are the most common secrets in Secret Mage. Nearly every build of Secret Mage includes two of each of these. However, you can make some exceptions to this if you target specific decks at the higher ranks. For example, Potion of Polymorph is a fantastic replacement for Explosive Runes against Cubelock. Cubelock bases its gameplan on the card Voidcaller, a four mana minion that summons a sizable demon from your hand.

The other type of Secret Card is reliant on your opponent’s mistake. These cards perform best when your opponent least expects it. I’ve played around with including cards like this in previous Secret Mage builds; however, my opponents often learned quickly to play around with these tools. In addition to that, these secrets run into the issue where your opponent sometimes plays around these secrets by accident.

A common scenario is when your opponent tests your secrets for Explosive Runes and gives you a weak minion through Mirror Entity. Or for a spell, when they use something like The Coin to test Counterspell—leaving you with a very expensive, wasted secret.

Vaporize, on the other hand, is something the majority of players at the higher ranks have simply learned to avoid. Ordering your minions to start attacking with the weakest minion first against Mage is common among the better Hearthstone players. Because of this, the effectiveness of this card leaves much to be desired.

The case for Netherwind Portal

Rigged Faire Game is the latest secret printed for the Mage class in the Darkmoon Faire. Overall Rigged Faire Game is simply great. It’s consistent, the effect is useful, and the extra draw tools feel rewarding since the deck no longer plays Aluneth. The additional synergy with Sayge, Seer of Darkmoon, is an extra selling point for the new card. All around great.

What secrets you should avoid in Secret Mage

With 16 available secrets for Secret Mage in the Wild format, some don’t make the cut. Secrets such as Splitting Image, Effigy, and Frozen Clone are best to avoid. The average outcome of these cards is just not good enough for the deck we play. A slower Mage deck may include some of these tools after a few more expansions, but for now, there simply isn’t the required support for these tools.

Does Ice Block deserve a spot in Secret Mage in the Darkmoon Faire?

One of the most debated cards for Secret Mage is whether Ice Block deserves a spot in the deck. One side argues that the card often does nothing, where the other argues the card saves them frequently from losing the game. In my last article covering the Secret Mage archetype, I discussed the upsides and downsides of playing it and left it to personal preference. However, with the Darkmoon Faire expansion, whether to include it or not is split between the two build paths we mentioned before.

The more “aggressive” Burn-secret mage deck removes the card in favor of a more active playstyle, which aims to more consistently beat the various Reno & Priest decks on the ladder. The purely tempo oriented list, on the other hand, includes Ice Block to increase the consistency of having its Secret cards like Medivh’s Valet and Cloud Prince active when they need it.

Aluneth is no more, the end of an era.

For a long time, nobody in the Wild Hearthstone community believed Aluneth would ever leave the Secret Mage archetype. A card that fulfilled its duty for almost three years tossed aside, just like that. However, the card that is replacing it, Sayge, Seer of Darkmoon, is just a better version all around. The draw is immediate, doesn’t lose you Tempo, and allows you to play one or multiple copies of Kabal Crystal Runner alongside it.

In addition to the far more explosive turn, it also doesn’t risk losing to weapon removal. Aluneth wasn’t ever the intended target for weapon removal cards. However, Aluneth often got caught in the crossfire. Since the Darkmoon Faire expansion’s release, I tried various lists, including those that play Aluneth alongside Sayge. However, Aluneth is just overkill for now.

So, how do you play Secret Mage in the Darkmoon Faire?

How to play Secret Mage is simple. Focus on building the strongest early game we can, and set up to kill your opponents in the midgame. Our secret enablers are the highest priority in the game since we want to avoid overcrowding our hand with secrets we have to pay for in most matchups.

If we look at Secret Mage on Hsreplay, we can see a very clear pattern arise. Unlike in the older version of Secret Mage, which included Aluneth as its life-line, Sayge, Seer of Darkmoon, is simply bad in your mulligan. The early game tools outshine everything else that Secret Mage otherways could access.

Finding Arcane Flakmage against Aggressive Hearthstone decks is the number one priority. However, besides that, our tools that draw some cards in the early game perform quite well. Flame Ward shines in the right matchups, but keeping it in the wrong ones can come back to bite you. However, with the December Hearthstone season starting, you can be certain many aggressive players are out for an early climb!

Throughout the game, try and fill out your mana the best you can. Use your secrets alongside your minions and make the game as difficult for your opponent as possible.