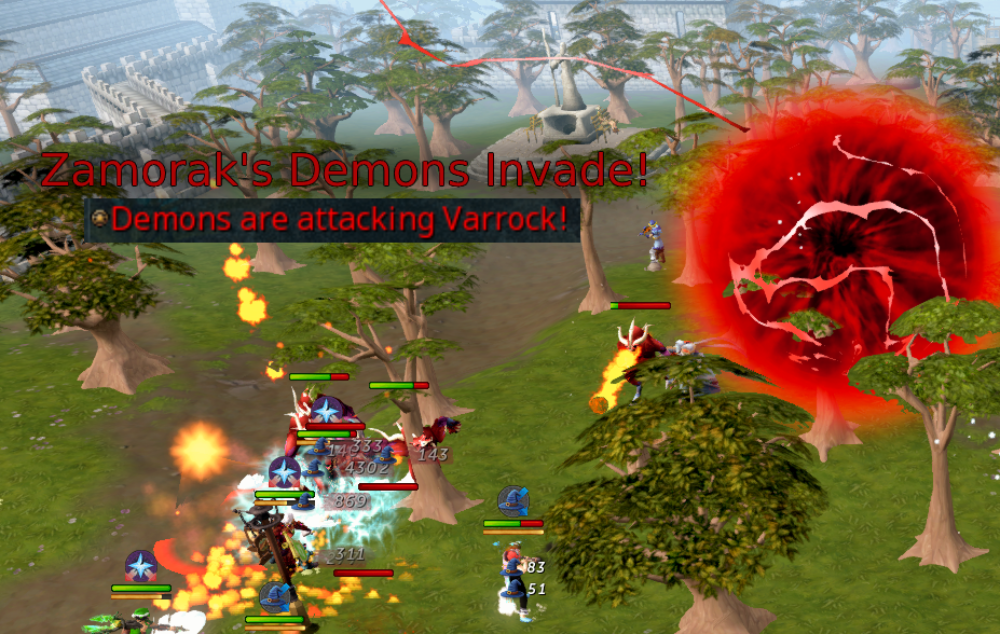 There are just two weeks until the release of Runescape’s next major update, the Legacy of Zamorak. The Legacy of Zamorak, arriving June 6th, introduces the fourth Elite Dungeon to Runescape, with the final boss being Zamorak himself. Ahead of the update, Zamorak’s demons are attacking cities all across Gielinor for players to take on, providing players with various rewards and upgrades to aid in the upcoming challenges.

Demons are attacking – What you need to know

There are six locations where Zamorak’s demons can spawn, at roughly two-hourly intervals. The spawn times differ for each world, so your best bet is to remain online and take on the demons anytime you see the broadcast in your chat. There are six different cities that Zamorak’s followers attack, which include Lumbridge, Varrock, Falador, Burthorpe, Ardougne, and Yanille.

Finding where the battle takes place is vital to unlocking the daily rewards during the time the followers roam Gielinor, as they only remain on the map for six minutes at a time. It is possible to unlock all four rewards in a single spawn, but lower-leveled players may need to attend two or more events instead to ensure they receive all the rewards each day.

Below is a quick guide to locating the spawn locations of Zamorak’s followers:

Falador: North of Falador, near the Falador Lodestone.

Burthorpe: South of the main city, near the lake and slayer cave (between Burthorpe and Taverley.)

Ardougne: South of the city, under the Ardougne Zoo.

The rewards of the Zamorak’s Demons Invade! pre-release event

There are four main rewards players can obtain from the Demons Invade event each day. The most valuable reward is the Zamorak Reroll token, which provides players the ability to reroll rewards after the Zamorak boss fight. The other rewards, the “Slivers” – The Sliver of Pain, Strength, and Power – will upgrade existing items. There isn’t a lot known about what, or how that works yet, but with the Slivers being the main part of the drop-table from Zamorak there is good reason to believe getting a head start on collecting these is going to be worthwhile.

Obtaining the rewards is simple, as all you have to do is participate in taking out 80 of Zamorak’s demons each day, getting a guaranteed reward for every 20 demons. To get the rewards there is no minimum number of damage required, so using multi-target abilities and participating in higher population worlds is highly beneficial to speed up the process.

For more Runescape3, be sure to read all about how to farm gold after the recent ED3 balance changes.

0 comments on “Zamorak’s Demons Invade! – What you need to know for all important rewards”