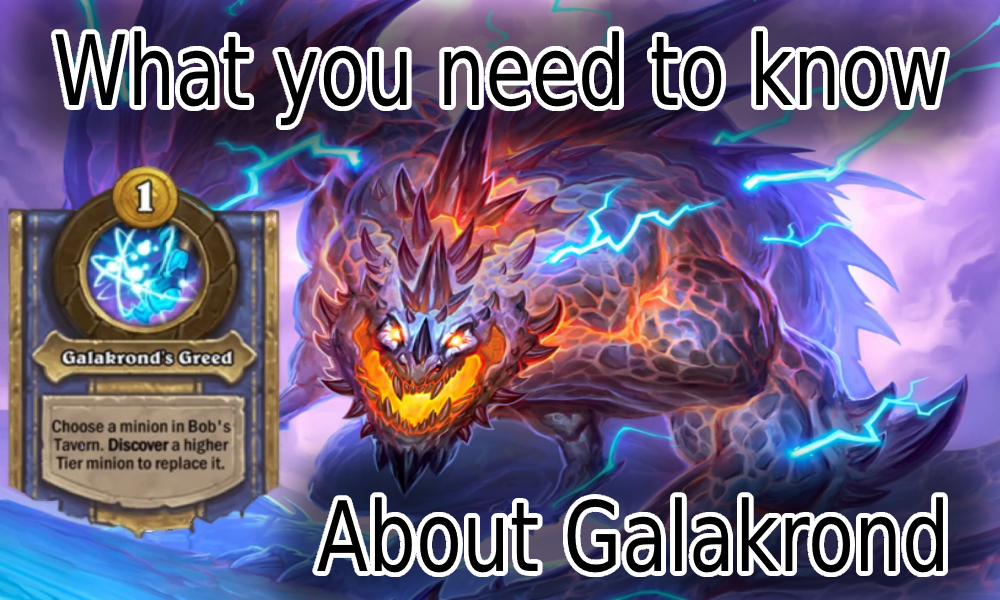 During Patch 20.8, Galakrond made his return with a big change to his ability, Galakrond’s Greed. Instead of the original hero power, which upgraded units to a random one from a higher tier, you now get to discover what the unit becomes. The new Galakrond’s Greed allows Galakrond first access to the most powerful units before anyone else.

While Galakrond’s Greed does require a gold investment each turn, the improved chance of finding strong high Tavern-Tier units makes up for that, and then some. A question one may wonder is, “which are the best units to choose?”

You want to pick cards that help create value or tempo. At T4, you want to find cards like Westwing Nestmatron, Impatient Doomsayer, or Dazzling Lightspawn. At times, GreaseBot and MechanoTank are good as well. At T5, Nomi and Mama Bear are your best cards to get. At T6, Famished Felbat, Ghastcoiler, Imp Mama, Charlga, Foe Reaper, Dread Admiral Eliza, and Nosy Looter become your ideal last choices.

You have to think ahead of what cards you want to discover with your hero power. Most of the time is to aim for the three Avenge T4 units: Impatient Doomsayer, Dazzling Lightspawn, and Westwing Nestmatron. With this in mind, you have to purchase minions that go well with those cards: Icky Imp, Scallywag, Acolyte of C’Thun, and MicroMummy, for example.

If you miss the T4, figure out what you do with your shot at a T5 or T6. For example, if you find Nomi, consider staying at T3 to find more cheap and consistent Elementals. Try to discover a Recycling Wraith with your hero power, then use their abilities together to find constant Sellementals and Refreshing Anomaly.
When you pick tempo-heavy cards with no end game plan, such as Ghastcoiler or Imp Mama, try to ride off their strength and aggressively upgrade while trying to also look for your win conditions. You have to learn how to transition out of these builds. For example, if you have an early Ghastcoiler for strength, you need to find perhaps a Cap’n Hoggarr and Tony-Two Tusk and transition into a pirate build after you used up Ghastcoiler’s immediate strength.

With the new meta from the big minion update, Galakrond now has three curves he can do. Toki Curve, Pocky Curve, and Rafaam curve. The first two curves focus on a strategy that plans to get T5 or T6 discoveries. The Rafaam curve is ideal for when you want to find the Avenge cards.

The first curve comes from Infinite Toki’s curve, where you create a curve where you upgrade and create value of your hero power before other players. While you will take some damage, you can easily make a comeback with a powerful higher-tier minion. The first curve is best when you don’t get a turn one token-generator unit.

Turn Four (6 Gold) – Upgrade to T3. And use Galakrond’s Greed on the T3 unit you discovered the last turn. Now, freeze your board once more.

Turn Six (8 Gold) – Use Galakrond’s Greed on the T5 you saved from the previous round, and choose the strongest option from your Discover. Alongside it, pick up units to start improving your Warband. If you already purchased the T5 unit the previous round, use Galakrond’s Greed again on the best target, and purchase any minions that improve your win condition & Warband.

This curve was made famous by the Battlegrounds player Pocky. The curve utilizes a token start by using your hero power as much as possible to get an early high-tier minion as soon as possible. While you may take a lot of damage as a consequence, you no longer have to worry about finding an end-game plan.

Turn One (3 Gold) – Buy Murloc Tidehunter, Alleycat, Sellemental. Sell one token and use Galakrond’s Greed on any remaining T1 unit. Make sure to freeze the unit you upgrade from here on out.

Turn Two (4 Gold) – Upgrade to T2, then sell your other minion. Use your remaining gold to use Galakrond’s Greed on the T2 unit from the previous round and freeze it again.

Turn Three (5 Gold) – Buy one minion, and use Galakrond’s Greed on the T3 from the previous round, which we freeze once more.

Turn Four (6 Gold) – Use Galakrond’s Greed on your T4 unit, and purchase it if it is something that benefits you enough. If not, pick up any other unit and freeze your T5 unit for the next round.

Turn Five (7 Gold) – Use Galakrond’s Greed on the previous round’s unit and discover a strong T6 unit. Consider here if you have the time and health to choose long-scaling units like Kalecgos if you can pick one. You likely lost most, if not all, the rounds until now, so think about how many more rounds you can afford to lose. Alongside the T6, you have three more gold to pick up the strongest remaining unit.

If you purchased the T5 already in the previous round, purchase a unit to improve your Warband and upgrade to T3. Then, start working towards your win condition by keeping yourself alive by replacing your weaker minions with better cards.

The Galakrond-Rafaam curve intends to find the T4 Avenge cards. You want to build yourself around those cards, and to do so, you should be buying minions with deathrattles or reborn. If you somehow miss these discoveries, there is a backup plan, more on that below.

Turn One (3g) – Buy a Token generator such as Murloc Tidehunter, Alleycat, or Sellemental. Sell a minion, then hero power another minion. If you do not find a token generator, roll until you find a shop that has Acolyte of C’Thun, Icky Imp, MicroMummy, or Scallywag. Freeze that shop, and hero power a minion that aren’t those minions.
Turn Two (4g) – Hero power the T2 minion you discovered. Buy a minion with deathrattle or reborn.
Turn Three (5g) – Hero power the T3 minion you discovered. If it’s the above-mentioned Avenge minions (Impatient Doomsayer, Dazzling Lightspawn, Westwing Nestmatron), then buy those minions. If not, freeze and buy another minion.
Turn Four (6g) – If you got the Avenge cards, start buying more minions with deathrattle or reborn. If not, then hero power for a T5. If it is good, then purchase it and upgrade. If not, freeze it and upgrade.
Turn Five (7g) – Assess the situation by the discover choices you have. If you picked an Avenge card, then upgrade. Upgrade or buy depending on your gold.
If you picked a T5, choose to stay behind to use that minion’s effects to good use or upgrade.
If you picked a T6, buy that minion and use its strengths in this turn immediately. You can upgrade next turn.

In the right hands, Galakrond is a fearsome hero. However, most players’ problem is their lack of understanding of utilizing Galakrond’s Greed the best. They often end up dying before using the win condition they find and think of the hero as weaker than it is. Remember, a single card cannot win you the game. Try your best to survive and slowly make your win condition ramp and scale your strength up. If you have your win condition, think hard on how you can best use it. It may not be as clear as you feel it could be.
For more of My Battlegrounds content, follow on Twitch, Twitter, or join our discord! Are you looking for something more? Read all about the up-and-coming heroes Mutanus & Trade Prince Gallywix & Kurtrus the Ashfallen and the classic Forest Warden Omu!